History of the Northeast Marble Meet

The Northeast Marble Meet was started by Stanley Block, Chairman of the Marble Collectors Society of America. Following a trip out to the Amana Marble Meet, Stan decided there was a need for a local meet for marble collectors in the Northeast. Since he lived in Connecticut, he began the show there.

The 1st Northeast Marble Meet (then called The North East Marbles Fair) was held on October 26, 1980 at the Fairfield Motor Inn, at the Rt. 1 circle in Fairfield CT. You can see a listing of the exhibitors on the Photos/Show Reports page.

The following year, Stan moved the Meet to Columbus Day weekend (October 11, 1981), and moved it down the road to the Westport Motor Inn (on the Boston Post Road at the Fairfield/Westport CT border). Attendees remember this meet as being down in the basement of the motor inn (home of the Treehouse Comedy Club for many years). 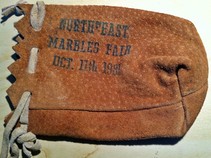 Leather marble bag stamped "Northeast Marbles Fair  Oct. 11th 1981". This bag was given out to attendees at the 2nd Northeast Marble Meet held on October 11, 1981 at the Westport Motor Inn, Westport CT.

By 1984, the meet had outgrown the space at Westport. It was moved further down I-95 to the Stamford Marriott in Stamford CT. The 5th Meet was held on October 7, 1984.

The 6th Meet was scheduled for October 13, 1985. However, the Marriott notified Stan in late January 1985 that they would be closed for renovations during the Fall of 1985 and the contract for the meet was cancelled. Because of health issues, Stan was unable to look for a new location and reschedule the show in Connecticut. According to the July 1985 issue of Marble Mania, Bill Sweet attempted to quickly put a show together in Rhode Island on Memorial Day weekend of 1985, but there was little time to get the word out and attendance was sparse. Bill was then able to put a show together at the Holiday Inn in South Attleboro MA, which was held on October 20, 1985.

The following year, the Meet returned to Columbus Day weekend, on October 12, 1986. It was again held at the Holiday Inn in South Attleboro, MA. The 7th Meet was run by Bill Sweet, Bert Cohen and Beverly Brule.

In 1988, the show was moved to Marlborough MA. The 9th Northeast Marble Meet expanded to a two day event, October 8 & 9, 1988. It was held at the Park West Hotel in Marlborough.

From 1988 until 2014, the show was held annually on Columbus Day weekend at the same hotel (even though the name of the hotel changed: Park West -> Radisson Hotel -> Courtyard Marriott). The early shows were managed jointly by Bert Cohen, Bill Sweet and Beverly Brule. Sadly, Bill and Beverly passed away in the early 2000s, and Bert continued to manage the show by himself. In 2012, Robert Block (Stan's son) took over co-management responsibilities with Bert.

The 35th annual Northeast Marble Meet was held Columbus Day weekend, October 11 & 12, 2014 at the Courtyard Marriott in Marlborough MA. This was the 30th meet that Bert was managing. At the age of 83, he retired from managing the Meet. Sadly, Bert passed away in December 2014 and we lost a giant of the marble collecting world

The 36th annual Northeast Marble Meet was held Columbus Day weekend, October 10 & 11, 2015. Beginning with the 2015 Meet, the Meet was moved to the Crowne Plaza Hotel in Cromwell CT. The Meet is managed by Robert Block.

In December 2015 the Crowne Plaza was acquired by Radisson Hotels and rebranded. The 2016 and 2017 shows were held at the Radisson.

In 2018, the Show was moved to Shelton CT, because the hotel in Cromwell had changed hands yet again. During the pandemic the hotel closed and was razed.

In 2019, the Northeast Marble Meet was held in conjunction with the Nutmeg Marble Show in Northboro MA.

The 2020 Northeast Marble Meet was canceled due to COVID-19 restrictions imposed on the venue. Also, in July of that year, Stanley Block passed away.

In 2021, the Meet was moved back to Connecticut and again held jointly with the Nutmeg Marble Show. at Turner Society Halle in Meriden CT. The 2022 and 2023 shows repeat at this location.